This is a set of Daz Studio light presets using the "Secluded Beach" HDRI and backplates from hdrihaven.com.  For each background image I have set the environment rotation and camera angle so that the light/shadows roughly match. Use the camera zoom in/out up/down/left/right to position your subject. Use the f/stop setting in render settings>Tone Mapping to adjust the exposure. As these mostly side or back lit, it might be worth adding a fill-in light or turn on the camera headlamp set to a low intensity.

I saved them as Scene files so you will have to load them before anything else is to be added. This is so that background image, render settings and camera all load together...so remember to save-as a different file name when your scene is complete ;-)

Just a basic shadow catcher for Daz Studio 4.9.3 3Delight renders. Useful for adding shadows when you have an image as a background such as grass where you want a shadow cast underneath your object

-Add a plane, select it and apply shadowcatch to the plane suface

Related on Daz - pw Shaders Bundle includes a Shadow catcher and much much more!

Edit: these are ok but I didn't really know much about hdri lighting when I made them!

Basic settings applied so will require tweaking as required per scene

Need more? Take your renders to the next level with Iray Light Manager Pro 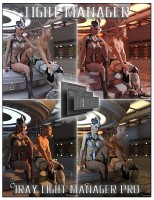